In the 1870 science fiction novel 20,000 Leagues Under the Sea, Jules Verne describes the Nautilus’ arrival in the Sargasso Sea, and notes its striking and almost alien appearance:

“Such was the region the Nautilus was now visiting, a perfect meadow, a close carpet of seaweed, fucus, and tropical berries, so thick and so compact that the stem of a vessel could hardly tear its way through it.”

Although it’s fit for a sci-fi novel, the Sargasso Sea is real: located off the east coast of North America, it sits in a subtropical gyre, a system of multiple ocean currents that leave the water in its center relatively still and calm[1]The Sargasso Sea. https://chm.cbd.int/database/record?documentID=200098.. 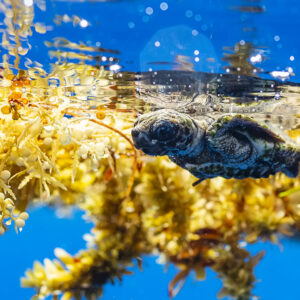 These conditions are an integral part of the Sargasso Sea’s distinctive appearance — biomass (meaning living or once-living matter) is drawn in from the surrounding ocean and accumulates in the Sea, making it a perfect environment for life, notably the macroalgae Sargassum (for which the sea is named), which grows in large, golden mats[2]Burton, R. Sargassum: Seaweed or Brown Algae. Florida Museum https://www.floridamuseum.ufl.edu/earth-systems/blog/sargassum-seaweed-or-brown-algae/ (2018).. Sargassum has been treacherous for sailors throughout time, but while boats may not benefit from its presence, many marine organisms do.The dense canopy is used as a nursery by the hatchlings of several turtle species, such as the endangered loggerhead turtle (Caretta caretta) and green turtle (Chelonia mydas), who seek out the habitat for its shelter and abundance of food[3]Wells, R. Legendary Sargasso Sea May be Sea Turtles’ Destination During Mysterious ‘Lost Years’ | University of Central Florida News. University of Central Florida News | UCF Today … Continue reading. However, as the climate warms, the sea is changing, negatively impacting the multitude of species that rely on it as a migration point, breeding ground, and habitat. So, what about the Sargasso Sea is changing, how important are these changes, and what is at risk?

Who Inhabits the Sargasso Sea?

To start, it is important to name the creatures that live here. Of the many organisms that migrate through the Sargasso Sea, notable among them are 30 species of cetaceans (whales and dolphins), sharks and rays, bluefin tuna (Thunnus thynnus), swordfish (Xiphias gladius), and eight species of seabirds[4]The Sargasso Sea. https://chm.cbd.int/database/record?documentID=200098.. It further provides habitats for over 127 fish species and more than 145 invertebrates. The sea has 10 species that are specifically adapted to the Sargassum ecosystem, including the Sargassum Crab (Planes minutes), Sargassum Pipefish (Syngnathus pelagicus), and Sargassum Anglerfish (Histrio histrio)[5]Sargasso Sea Commission. The Protection and Management of the Sargasso Sea. http://www.sargassoseacommission.org/storage/documents/Sargasso.Report.9.12.pdf (2011).. Amazingly, it is the only place that American (Anguilla rostrata) and European Eels (Anguilla anguilla) are known to breed[6]Roe, H. S. J., Freestone, D. & Sapsford, F. The Sargasso Sea High Seas EBSA After Ten Years: Is It Still Relevant and How Has It Helped Conservation Efforts? Front. Mar. Sci. 9, (2022).. 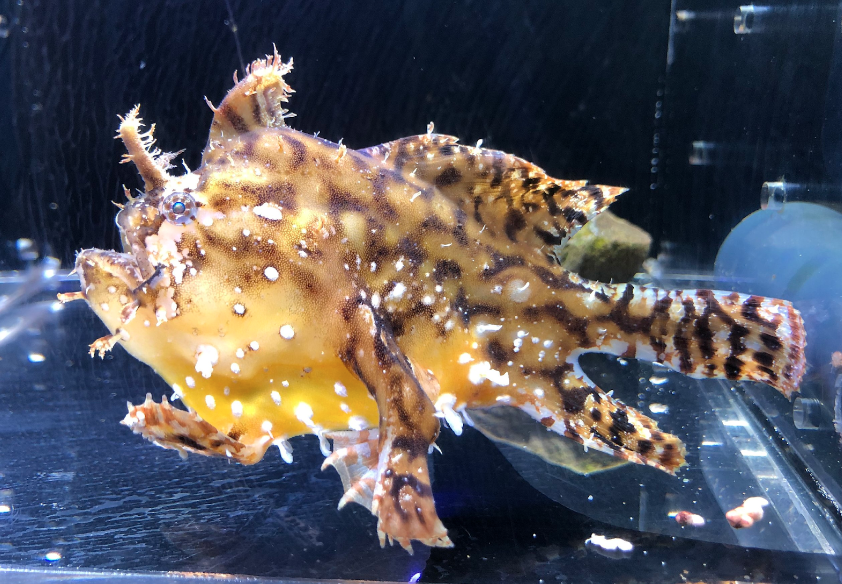 Alongside its role as a home for sea creatures, it also serves as a transitory space, in which many migrating species pass through to feed and refuel during their journey: bigeye tuna (Thunnus obesus), bluefin tuna, and other large fish species travel through the sea as part of their migration route through the Atlantic Ocean[7]Bulger, F. Governance of High Seas Ecosystems: Big Data & AI. Sargasso Sea Commission http://www.sargassoseacommission.org/sargasso-sea/biological-significance.. Along with swordfish, these tuna forage at depths in the Sargasso Sea and act as apex predators (predators that have no predators themselves), which modulate the rest of the food chain by controlling the abundance of smaller predators, such as squid and some flyingfish. Similarly, Humpback whales (Megaptera novaeangliae) migrate through the sea, which is roughly halfway between their wintering and summering sites. It is possible that humpback whales could have used regions of the Sargasso Sea near Bermuda as a breeding ground when their population was larger, and a future, species-wide recovery could see a return to the area for mating seasons[8]Stone, G. S., Katona, S. K. & Tucker, E. B. History, migration and present status of humpback whales Megaptera novaeangliae at Bermuda. Biol. Conserv. 42, 133–145 (1987)..

Climate Change and the Sargasso Sea

As the climate has changed, the Sargasso Sea has become warmer, saltier, and more acidic[9]Bates, N. The Sargasso Sea has become warmer and saltier, and the loss of oxygen and ocean acidification is accelerating | News | BIOS – Bermuda Institute of Ocean Sciences. … Continue reading. Due to an increase in water temperature, there has been a decrease in dissolved oxygen, which is critical when assessing the habitability of an ecosystem. Studies of the Sargasso Sea have shown that coral, seagrass, and fish communities are less abundant in oxygen deficient waters, greatly affecting their size and resilience[10]Hendy, I. W. et al. Climate-driven golden tides are reshaping coastal communities in Quintana Roo, Mexico. Clim. Change Ecol. 2, 100033 (2021).. The impacts of these changes in the water can best be seen in the critically endangered European eel (Anguilla anguilla) which historically has faced dramatic population decline as a result of overfishing, pollution, and human activity[11]Cena, M. 70 million years on earth, 40 years of decline: the endangered eel. https://phys.org/news/2021-12-million-years-earth-decline-endangered.html.. More recently, there have been connections between the eel’s abundance and ocean acidification and warming. Ocean acidification, a result of increased carbon dioxide emissions, appears to interfere with the environmental cues that lead young eels from the Sargasso Sea to freshwater, as they have specifically adapted to spend the majority of their lives in rivers[12]Borges, F. O. et al. Ocean warming and acidification may challenge the riverward migration of glass eels. Biol. Lett. 15, 20180627 (2019).. The same study found a correlation between an increase in ocean water temperature and a decrease in eel offspring survival[13]Borges, F. O. et al. Ocean warming and acidification may challenge the riverward migration of glass eels. Biol. Lett. 15, 20180627 (2019).. Ocean warming also has a demonstrated impact on coral reef systems that support a variety of fish, crustaceans, etc. at the bottom of the Sargasso Sea. The elevated temperature reduces their nutrient supply and affects algae that supports them symbiotically[14]A Sargasso Sea Study of Ocean Productivity Under Global Warming. High Meadows Environmental Institute … Continue reading. A final, and concerning trend, is the potential interruption of vital currents that define the very existence of the Sargasso Sea. Ocean currents have reportedly slowed down as a result of ocean warming and salinity changes[15]Ocean Currents and Climate Change. Climate Reality Project https://www.climaterealityproject.org/blog/ocean-currents-and-climate-change.. If this continues, and the currents slow to a stop, the Sargasso Sea could cease to exist entirely.

The Sargasso Sea and the Anthropocene

As an ecosystem, the Sargasso Sea is remarkable in its complexity. Its benefits as a habitat alone sustain a host of commercially important fish species, provide shelter to iconic ocean wildlife, and provide opportunities for ecotourism, especially for Bermuda, whose jurisdiction falls over a section of it. Many of these species, in particular the tuna, have high economic value. Overfishing in our oceans has limited the regeneration of fish stocks, and biodiverse pockets like the Sargasso Sea are critical for their capacity as developmental areas. It is difficult to fully quantify the intrinsic and extrinsic value of the sea, but The World Wildlife Fund made a poignant graphic (Figure 1) on just how important it is in what is called the blue economy, a term that encompasses economic activities related to the ocean and coasts[16]United Nations. Blue Economy: oceans as the next great economic frontier. United Nations Western Europe https://unric.org/en/blue-economy-oceans-as-the-next-great-economic-frontier/ (2022).. The Sargasso Sea is undeniably interlinked with human activity and livelihoods, and yet oddly enough it remains relatively unknown. As far as most people know, it is part of the great expanse of the Atlantic, often greatly overshadowed by its more ominous neighbor, the Bermuda Triangle. And yet, the currents that surround the Sargasso Sea draw nutrient runoff, plastic pollution, and increasingly warmer water into it, slowly but surely transforming the landscape. In fact, some estimates have found the microplastic content of the sea comparable to the Great Pacific Garbage Patch[17]Microplastic levels in Sargasso Sea comparable to Great Pacific Garbage Patch. Greenpeace International … Continue reading.

What would life be like without the Sargasso Sea?

The Sargasso Sea touches the life cycles of innumerable species, and without it, there would be huge losses in biodiversity, increased fragility in fish populations, and a change in the Atlantic Ocean as an entire ecosystem. The loss of this dynamic space would put extra pressure on turtles, eels, and all other species that rely on it for safety for their young, leading to potential extinction. Continued changes in water quality and characteristics may interfere with migratory species, altering known, historical migration routes, which could have deadly consequences with increased ship traffic. And, to top off all of the chaos, climate change threatens the very currents of the ocean. It is more important than ever to strengthen marine protection laws surrounding this ecosystem. Status as a marine protected area could limit industrial activity (e.g. drilling for oil), regulation of fishing, or limiting unnecessary vessel traffic, all of which can prove damaging to the chemical and biological cycles of the ecosystem. Of course, this is much easier said than done – it requires in-depth international cooperation as it is a “high seas” region, meaning it is not bordered by any land. The protection of the Sargasso Sea necessitates new strategies that are not limited to geographical boundaries, as high seas areas are fluid and not necessarily bound by the same constrictions of terrestrial regions[18]Acton, L., Campbell, L. M., Cleary, J., Gray, N. J. & Halpin, P. N. What is the Sargasso Sea? The problem of fixing space in a fluid ocean. Polit. Geogr. 68, 86–100 (2019). The Sargasso Sea Commission has been credited with increased recognition of the sea and supporting the goals under the Hamilton Declaration, which has continued collecting signatures from different countries[19]Bulger, F. Hamilton Declaration. Sargasso Sea Commission http://www.sargassoseacommission.org/meet-the-commission/hamilton-declaration.. Although the commission does not have managerial authority, it acts as a facilitator to the different international interests in conserving the Sargasso Sea for generations to come.

So what can you do to help the Sargasso Sea? First, talk about it! Environmental issues benefit from awareness, and telling others about this still under-recognized wonder goes a long way. If you would like to donate, you can help fund the Sargasso Sea Commission’s variety of activities, including regular workshops and projects centered around: designating the sea as a protected area, safeguarding critically endangered species, like the European Eel, and addressing new ways to protect migratory species. Visit their website for more information. If you live in one of the ten Hamilton Declaration signatory states (U.S., U.K., Canada, Bahamas, Bermuda, Dominican Republic, Virgin Islands, the Azores, Monaco, or the Cayman Islands), tell your government to keep it up! If you do not, voice the issue to your representatives, especially if it is in proximity to the Atlantic Ocean, as it is anticipated that many more countries will join the declaration in the future.

← Prev: Why Sharks are Important for Marine Ecosystems Next: A Guide to Understanding Shark Behavior →