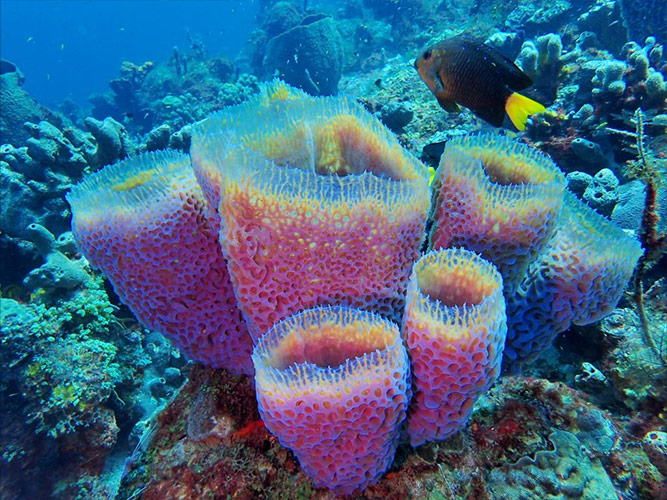 Welcome back to LegaSea Ecology everyone! I hope you are looking forward to learning about arguably one of the most underrated organisms in the ocean- the sponge! Contrary to popular belief, sponges are actually living animals that provide a variety of ecosystem services that help keep the ocean, and all of the organisms in it, healthy! Alright, let’s dive in.

Sponges are sessile (meaning fixed to one place) aquatic metazoans and are some of the oldest multicellular organisms to exist with records dating back over 700 million years ago [1]1. Carballo and Bell, Climate Change, Ocean Acidification and Sponges.. In the phylum Porifera, ( which originates from the latin word, Porus meaning ‘pore’ and fer meaning ‘bearing’), there are five different classes of sponge (Demospongiae, Hexactinellida, Calcarea, Homoscleromorpha) making up to approximately 9,235 species[2] 2. Porifera. Digital Atlas of Ancient Life https://www.digitalatlasofancientlife.org/learn/porifera/.!

While sponges lack differentiated organs, they do, in fact, have differentiated specialized cells that are critical for survival, lets go over some of them here:

First, we have choanocytes. Also referred to as “collar cells”, choanocytes are specialized cells that line the internal surface of the sponge, each with a flagellum, a tail-like structure. When choanocytes join together they make up the choanoderm. Choanocytes have two main functions: to filter water through the cells, and to capture food items as they pass through [6]4. “Choanocyte – an Overview | ScienceDirect Topics.”. Next we have pinacocytes, also referred to as “pavement cells”. Pinacocytes make up the pinacoderm which makes up the outermost layer of the sponge. The pinacoderm contains ostia, which are small inhalant pores lined with choanocytes- this is where the water enters through the sponge. The water then is released through the oscula, a  large exhalant pore, where the water leaves. At least six different pinacocytes exist depending on position and structure. The function of pinacocytes is to isolate the sponges internal structure from the external environment, serving as a “skin” equivalent [7]5.“Pinacoderm – an Overview | ScienceDirect Topics.”.

The sponges skeletal structure is made out of either silica or calcium carbonate spicules, which are critical for the structural integrity of the sponge and have a unique growth pattern depending on the species. Depending on which chemical compound a sponge uses for its structure, it will be described as “siliceous” (when using silica) or “calcitic” (when using calcium carbonate) [8]6.“Structure of Sponges,  Biodiscovery and the Great Barrier Reef , Queensland Museum”.

Nutrient poor water is not where one might think to find one of the most abundant ecosystems on earth, but coral reefs persist nonetheless- how is this possible? The answer: the sponge loop! The sponge loop describes a phenomenon that occurs in coral reef ecosystems where sponges distribute dissolved organic matter (DOM) through the reef’s trophic levels (also known as the “food chain”) [10]7. de Goeij, J. M. et al. Surviving in a marine desert: the sponge loop retains resources within coral reefs. Science 342, 108–110 (2013) .

Sponges seem to be the masters of survival due to their simple body structure, which lacks organs and true tissues [17]1. Carballo and Bell, Climate Change, Ocean Acidification and Sponges., will they be able to evade the climate crisis too?

Due to their sessile nature, unlike other organisms, sponges are unable to escape their environment which suggests they may be particularly vulnerable to any changes[18]1. Carballo and Bell, Climate Change, Ocean Acidification and Sponges.. Many studies have demonstrated a positive correlation between sponge mortality (death) and increased water temperatures (starting with a  study conducted in 1989 by V.P. Vicete), and that in certain species such as Rhopaloeides odorabile there is a decrease in filtration ability with just a 2°C (36°F)  increase, other species such as  Halichondria panicea (adoringly referred to as the “breadcrumb sponge”) show an increase in filtration ability at a temperature increase of 5.5°C (42°F)[19]1. Carballo and Bell, Climate Change, Ocean Acidification and Sponges.. Simply put, there is some evidence to suggest that warming temperatures would have an impact on sponge species, but that impact is not universal across the board; this topic would benefit from more research. Similarly, there seems to be a lack of clarity on the effects of ocean acidification on sponges. While some studies have demonstrated a decrease in overall sponge abundance, as well as reproductive and regenerative abilities with an increase in ocean acidification[20]9. Goodwin, C. et al. Effects of ocean acidification on sponge communities. Marine Ecology 35, 41–49 (2014) . However, there have been other studies done that have demonstrated that an increase in ocean acidity reduced mortality and increased growth [21]​​10. Page, H. N., Hewett, C., Tompkins, H. & Hall, E. R. Ocean Acidification and Direct Interactions Affect Coral, Macroalga, and Sponge Growth in the Florida Keys. Journal of Marine Science … Continue reading.

Now, this all being said, research reported by University of British Columbia on a community of glass sponge (Hexactinellida) in the deep and cold water reefs of Howe Sound in the pacific northwest found that warming ocean temperatures and acidification can have a serious impact on sponges skeletal strength and filter feeding capacities.  Additionally, it was discovered that even a small change in water temperature and acidity reduced the sponges pumping capacity by over 50% and caused tissue loss between 10% and 25%. Furthermore, it was noted the integrity of the sponges skeleton was compromised and caused the structure to become far more elastic and brittle which exposed the sponges to more damage as other reef organisms walk or swim among them. These sponges are critical for maintaining the reef ecosystem as they are the primary water filterers and nutrient cyclers, while also providing critical habitats to a variety of different organisms such as prawns, herring and sharks[22]11.Climate change an imminent threat to glass sponge reefs: First long-term lab study of glass sponges reveals dire impacts of ocean warming and acidification. ScienceDaily … Continue reading.

Through my research it seems that sponges are an incredibly understudied organism that could absolutely be explored further. Some studies suggest that ocean acidification and increased temperatures that result from global warming could have negative impacts on the species through a decrease in reproductive ability and overall resilience, while other studies demonstrate the exact opposite with increased growth and reduced mortality! To say I have entered a wormhole is an understatement, however, I plan to continue this research and get back to you on what I find. I hope you have enjoyed this short segment on our new favorite marine animal (say it with me)… sponges! Thanks everyone! 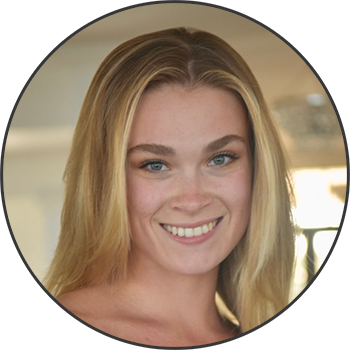 ← Prev: An Introduction to Hydrothermal Vents Next: Are Marine Fungus Among Us? →