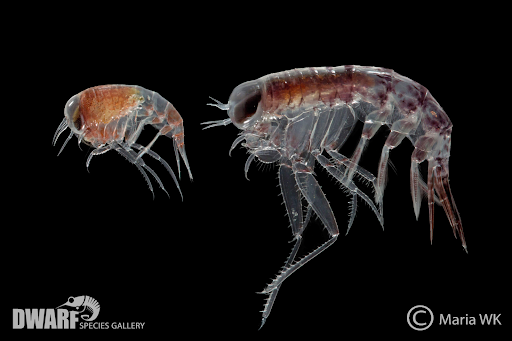 If you have ever heard stories of deep sea monsters like the Kraken you have already been exposed to today’s concept, deep sea gigantism!  Gigantism is a phenomenon used to describe the visible size difference in organisms found in some of the more remote places on earth, like the deep sea or marine polar environments. To fully understand deep sea gigantism we must explore other concepts such as the Island rule, Bergmann’s Principle, and Polar Gigantism. I hope you are as excited to learn about this topic as I am, let’s get into it!

To begin, let’s discuss the Island Rule. This rule hypothesizes that island environments produce distinctive selection pressures such as reduced predation, relaxed competition, and diminished food supplies that can potentially result in complex evolutionary changes in body size. [1] 1. McClain, Boyer, and Rosenberg, “The Island Rule and the Evolution of Body Size in the Deep Sea.” Essentially, the Island Rule hypothesizes that typically small bodied organisms will be large (gigantism), and typically large bodied organisms will be small (dwarfism), in certain environments.

It has been suggested that the reduced interspecific competition (the competition of limiting resources between species) [2] 2. “Interspecific Competition – an Overview | ScienceDirect Topics.” in these areas can lead to an anomaly called competitive release, which describes what occurs when species are freed from limiting environmental resources. [3] 3. “Competitive Release | Encyclopedia.Com.” In theory, this would allow small-bodied species to have reproductive and starvation survival benefits of being larger without the increased predation risk that could be found on non-island environments. [4] 1. McClain, Boyer, and Rosenberg, “The Island Rule and the Evolution of Body Size in the Deep Sea.”

Next, let’s discuss Bergmann’s Principle, developed in 1847 by German physiologist Karl Bergmann. This principle states that body size of warm-blooded organisms in the northern hemisphere increase from south to north. [6] 4. Timofeev, “Bergmann’s Principle and Deep-Water Gigantism in Marine Crustaceans.” Simply put, members of the same species may be larger near the poles than those near the equator.

Bergmann’s Principle has been used to explain a phenomenon known as polar gigantism. An example of Bergmann’s Principle and Polar Gigantism can be demonstrated by two different organisms from the genus Themisto: Themisto libellula of the arctic waters and Themisto abyssorum of the atlantic waters. Although they are part of the same genus, T. libellula (found in the arctic) can reach sizes up to 60 millimeters and live for 3 years while T. abyssorum (found in the atlantic) reaches sizes up to 20 millimeter and only has a 2 year lifespan. [7] 4. Timofeev, “Bergmann’s Principle and Deep-Water Gigantism in Marine Crustaceans.”

What do these things have to do with Deep Sea Gigantism?

Now that we have discussed the Island Rule, Bergmann’s Principle and its relation to Polar Gigantism, let’s discuss what each of these have to do with Deep Sea Gigantism.

As on islands, the deep sea is characterized by low resource availability. This can result in a decrease in biomass and abundance compared to shallow water systems which typically have an increase in biomass due to ample resource availability. Therefore, it can be suggested that there may be similar evolutionary characteristics of organisms living in the deep sea as ones on secluded island environments due to a similarity in  ecosystem.

Now that we have explored numerous principles that give a broader overview of why Deep Sea Gigantism may occur, we need to investigate more closely the biologically processes that potentially make this phenomenon possible.

While the oxygen-temperature hypothesis is one of the most conceptually straightforward and experimentally tractable claims, there has been emerging evidence that refutes this hypothesis, most notably the discovery that some large bodied organisms do occur in warm, hypoxic (oxygen poor) environments, instead of solely cold, oxygenated waters.

Since then, researchers have suspected that perhaps gigantism occurs in taxonomic groups when ecological conditions are good and when environmental productivity is particularly high, when it would be favorable for a species to undergo body size diversification.

That’s all for this blog folks, I hope you learned something new! Make sure to check out our YouTube channel, @LegaSeaTV, and subscribe to our weekly newsletter to stay up to date on our content! See you next time!